The 6th episode in my series on hands-on training for Azure is about how to use VSTS (Visual Studio Team System – the online service) to build and deploy (CI/CD) docker container apps on Azure Kubernetes Service (AKS). If episode 5 was a low-level way of getting and app onto AKS, this episode will be easy and show the power of VSTS.

In your VSTS environment, you create a new project and you import the existing Github repo we used in episode 5, ie https://github.com/Azure-Samples/azure-voting-app-redis.git to get a clone a copy of code base. 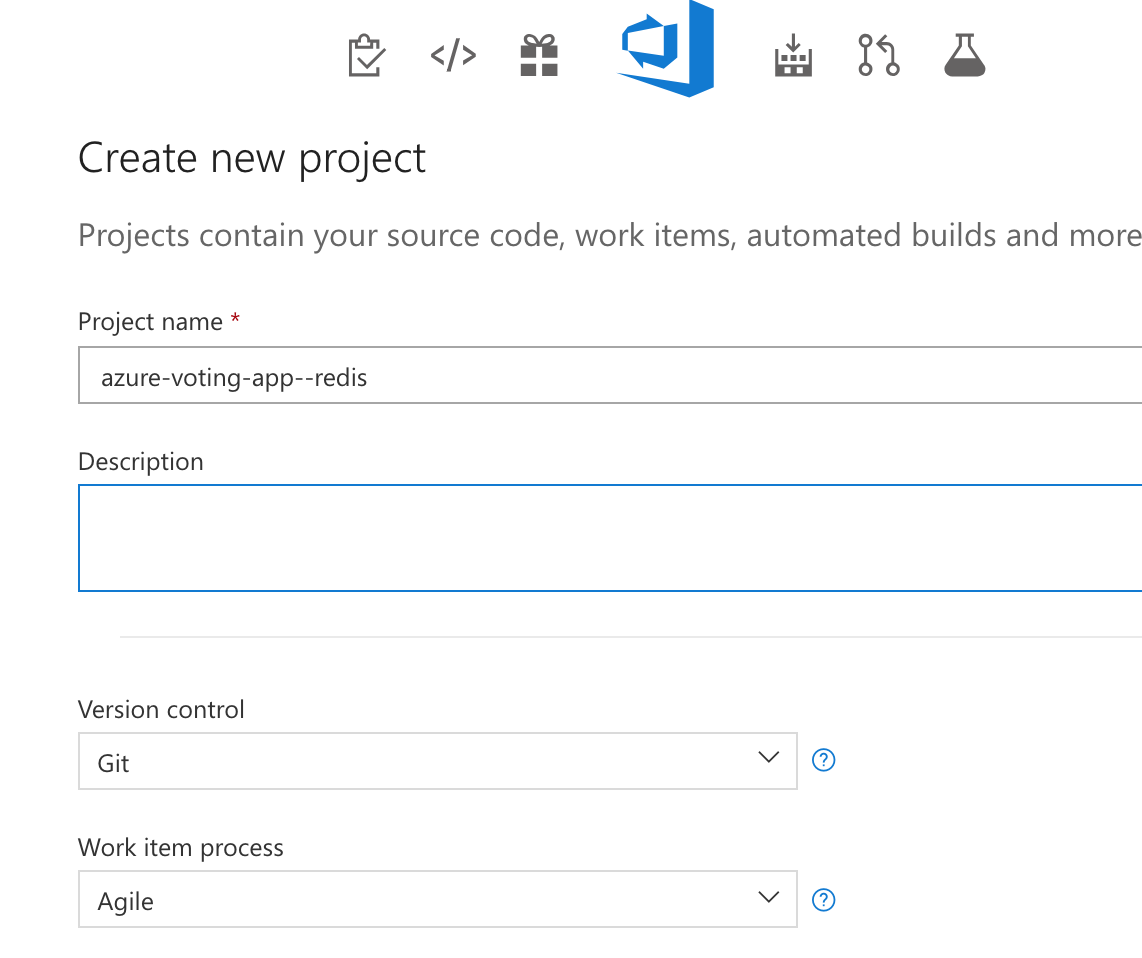 In this page you select “import a repository” and then paste in the “git clone” url. 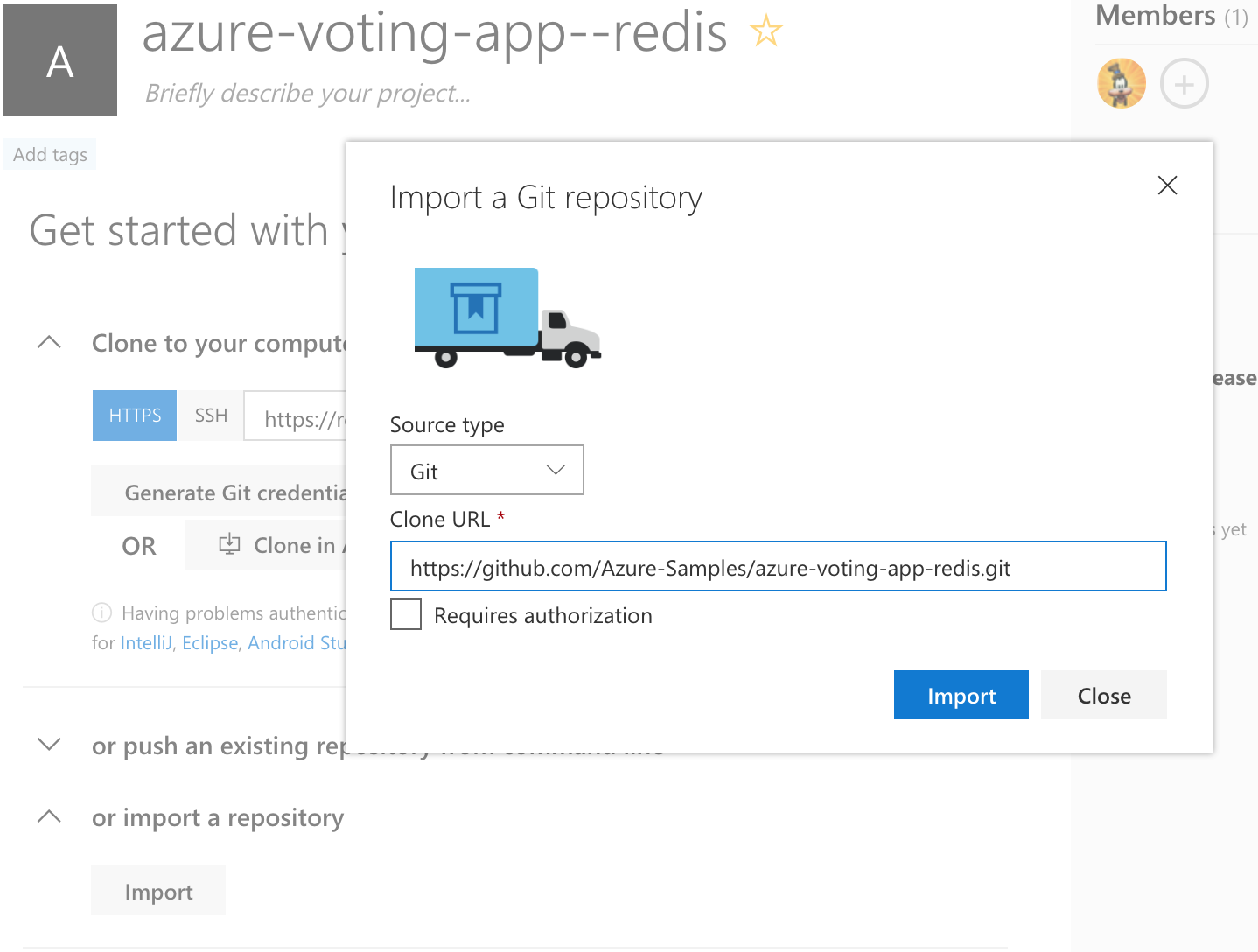 Since this is a Python project, the build process is quite simple since we have no compilers, etc, we need to exercise. All we need to do is to build the docker image(s) and publish the build artifacts.

You select Build and Release > Build and then + New to create a new Build Definition. Next you accept that the source is VSTS Git, your Team project, repository and the master branch. When you come to the “Select a template” you select “Empty process” instead of selected anything prefabricated.

On the next page you configure the Agent queue to use “Hosted Linux Preview”, then click the + sign next  to “Phase 1” on the left side, switch to the Build-tab and add two of the “Docker Compose” task items and finally add “Publish Build Artifacts”. Your build pipeline should look like below. 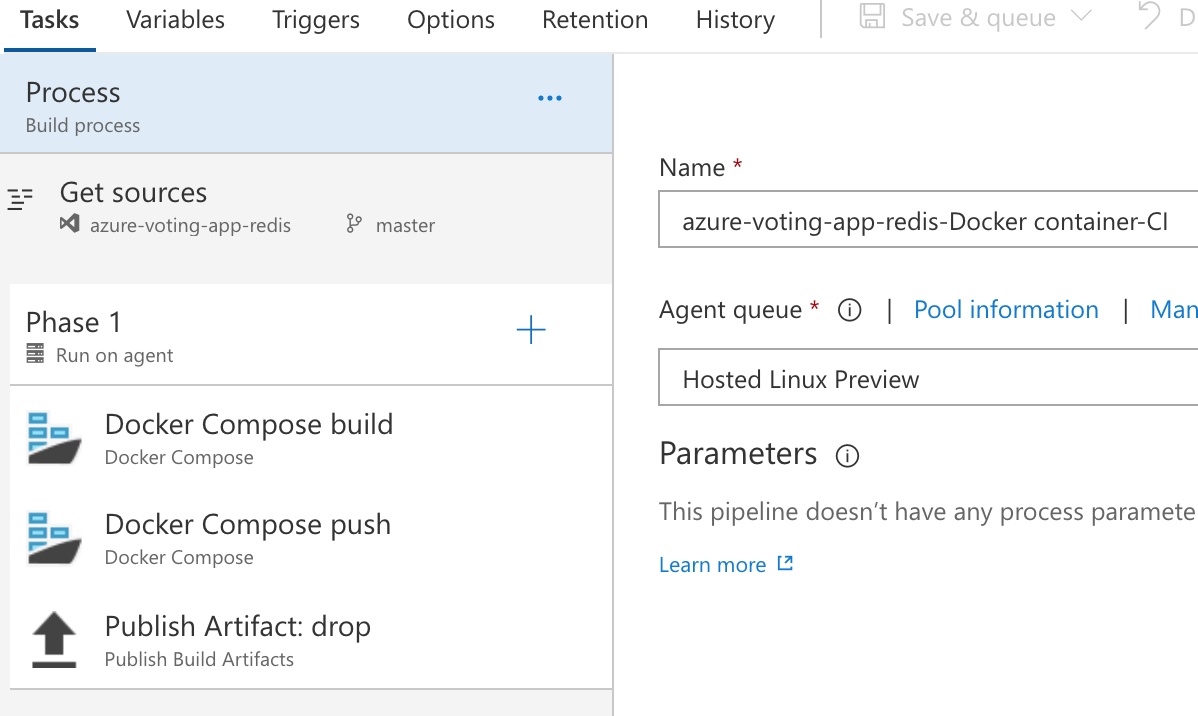 The Docker Compose Build step should have config settings as below: 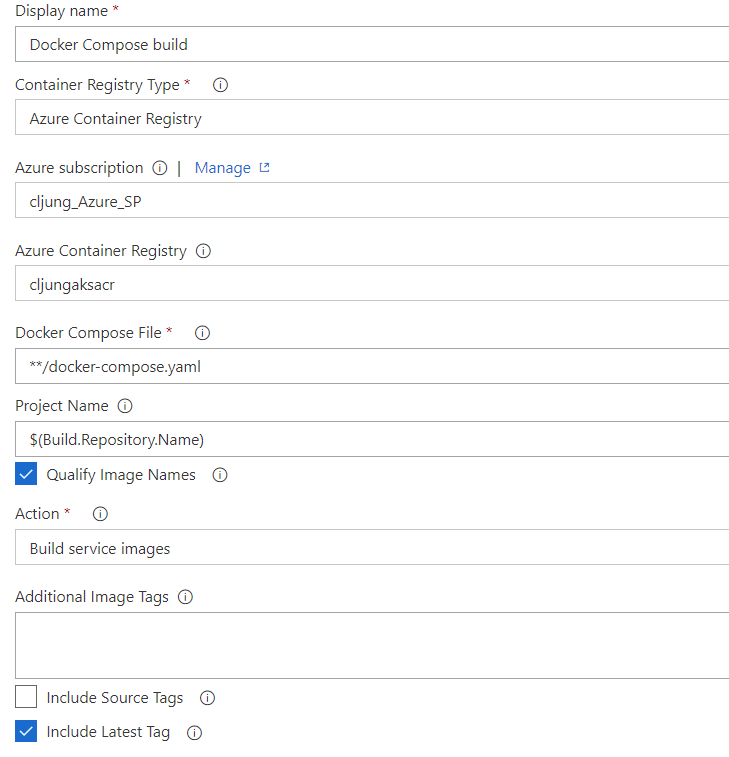 The Push step have the similar config settings, except that Action = Push service images.

VSTS tries to shield the user who isn’t so familiar with Azure when it comes to setting up how it authenticates to an Azure subscription via creating Service Principals for us almost without asking. I don’t really like that personally, so here’s how I do it.

If you do it the easy way, you’ll end up letting VSTS creating a Service Principal in every project you’ll ever configure to use Azure – and that will be plenty of objects floating around in Azure AD, which will lead to that one day you get a good telling off by some admin.

Python is an interpreted language so there are no outputs, like dlls, from the build, but there are two reasons we still need to publish the artifacts of a build. The first is that the build is a snapshot of the master branch at the time of build and without the publish step we wouldn’t have that data anywhere. The second reason is that one usage of the build artifacts is when we deploy the docker images to Azure Kubernetes Service. At that point we need the YAML file from the code base that defines how that should be done, even though the application itself is stored as images in the Azure Container Registry.

The “Path to publish” needs to be changed, since it is by default $(Build.ArtifactStagingDirectory), but since there are no binary output, etc, from a Python build, we need to change it to $(Build.SourcesDirectory) in order to publish the actual source code.

Building the Application with VSTS

If you save the above Build Definition you can queue a new build of it. It is going to run pretty fast once it starts building and when it succeeds you can see that you have a new image in the repository of Azure Container Registry (ACR) 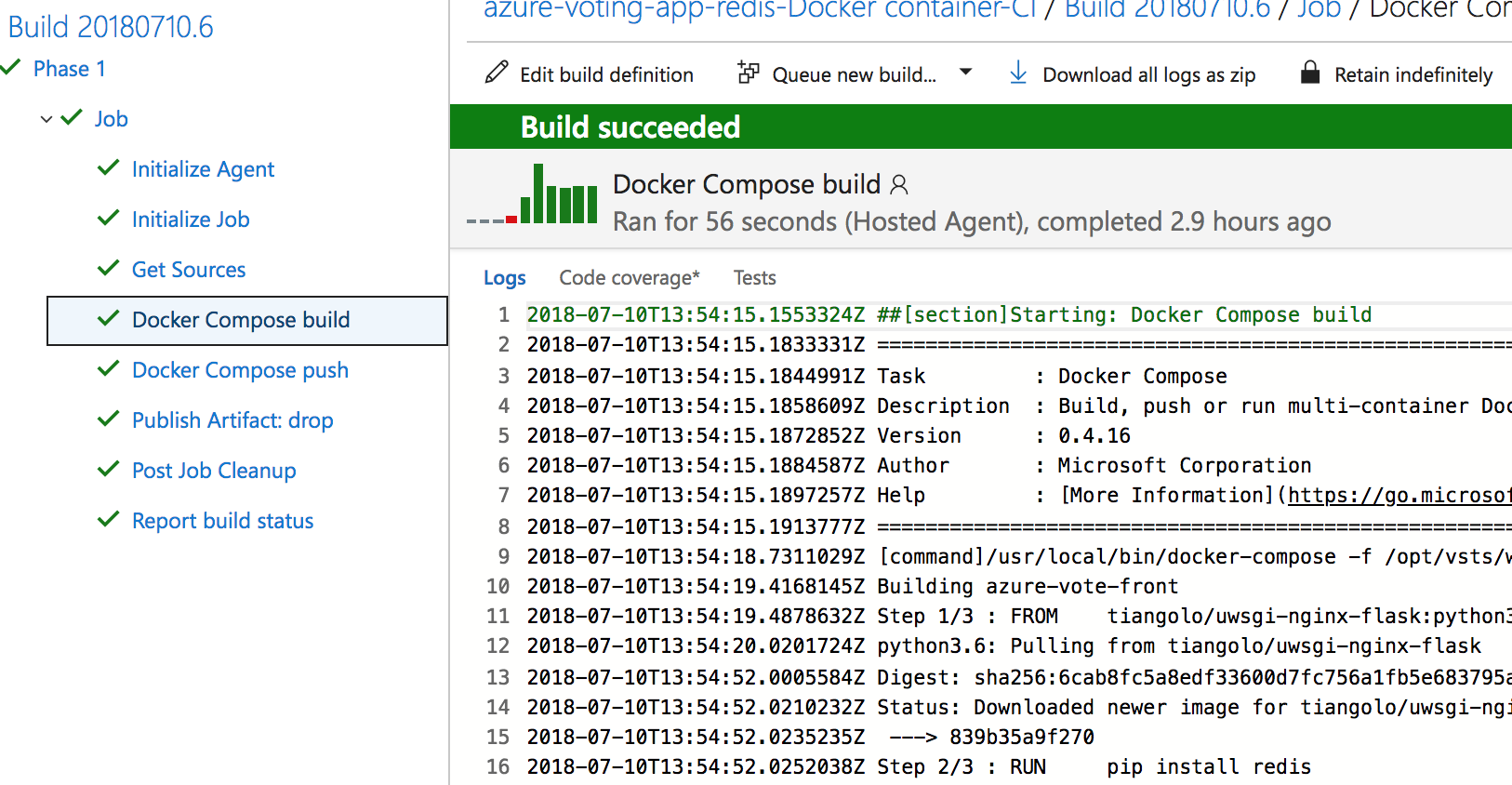 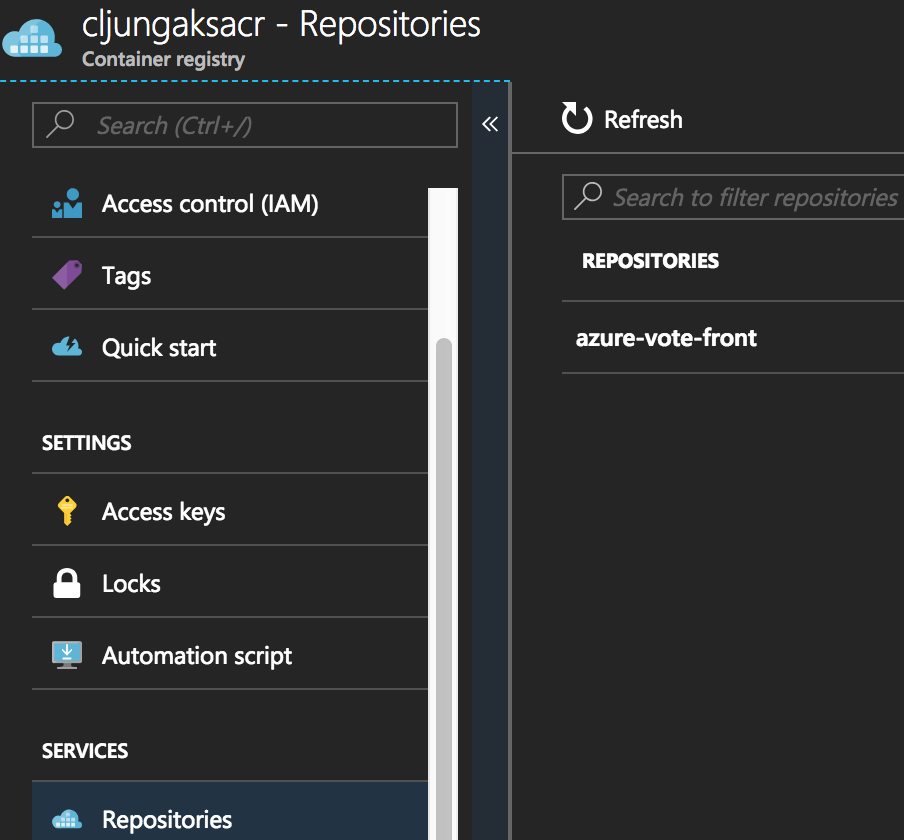 In next post, 6b, I’ll continue on this and add the Release step that does the Continuous Delivery and actually deploys the docker images as container applications onto the Azure Kubernetes Service.